I wanted to post a few pictures what I think are some pretty cool seeds. 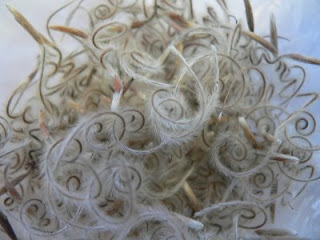 These are seeds from Cercocarpus or Mountain Mahogany. We have several small bushes lining the south fence in the back yard and one of them produced seeds this year. This fall I was trying to find information about planting the seeds and I read that the curly-cue tail helps the seeds travel in the wind. When they land, the tip goes to the ground and the tail uses changing moisture in the air to twist the seed down into the ground.
I decided to try to winter sowing the seeds. I hope to plant them along the east fence, though they may take years and years of slow growth to look like much. I sowed them in the 1 quart containers that our orange juice comes in. I had purchased a bag of soil from W-World (you know the one...) hoping to find a cheaper solution to the really expensive bag I purchased at a nursery. I gave it a shot because it was a product of Colorado, and I was holding out hope that it would be good. I don't think I'll be purchasing more... I had containers that were wet like the mud pies I made when I was little. I decided to use it for some of the seeds I had collected from what few things grow in my yard. I had collected the Mountain Mahogany as well as a lot of Liatris and Goldenrod. I have enough to try again if these don't work. I didn't want to risk the seeds that are of a more limited supply. 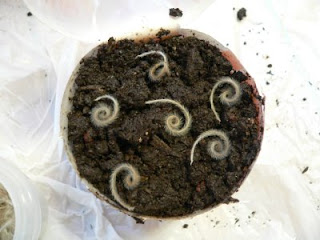 I planted 6 seeds in each container (I think) 13 containers total. 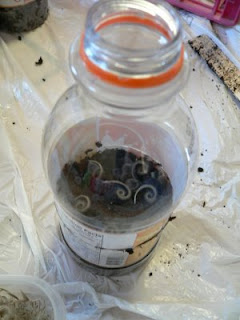 I didn't worry about labeling these because these are the only plants that are in OJ bottles. 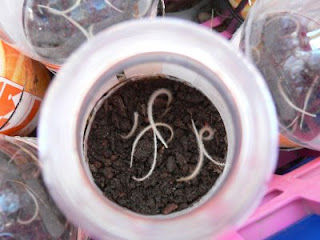 I went to check on the containers after they had been out for a little while. I found that all the tails were straightening out with the humidity. This photo was taken after 2 days of being outside. I was quite surprised at the difference.

When I was looking for information about these plants I found quite a bit of information about the bushes in the wild but not much about how to grow them at home from seed. I found one person on GardenWeb in another state who had grown them from seed in the past. I'm fairly sure these are Alderleaf Mountain Mahogany since the plants are not evergreen like the Curl-leaf and I don't think the leaves looked like the Littleleaf variety. I do know that these are some very tough bushes. They survive on very little water. I gave them a small drink once last summer and they got a very thorough soaking (close to drowning) twice in August after a the 2 heavy rains we had (all summer). They are planted at the bottom of a sloped area and in addition to the rainwater they also caught a lot of the water that came from the sump pump in the basement. I moved one of the bushes toward the end of summer because it was growing up into the fence. I watered it a couple times after moving it and then I forgot about it for a bit. When I went out to check on it, it looked quite dead, but the little guy surprised me and put on some new leaves in the fall! I can't wait to see if my cool little seeds will grow!!

These seeds and photos are awesome! (RMGer here). They make me think of the photos by Karl Blossfelt, except not black and white!

Thanks Minkey!
I really hope they are viable seeds. They take forever to grow but those are some tough plants!