I'm slowly making some progress on the garden. Part of the reason we chose this house was the extra 3/4 acre lot that was also available.  The house is on 1/4 acre, so we ended up with just over an acre.  You can see in the aerial view that we have almost an arrow shaped lot (both included) because the back lot is a big triangle.  The downside is it does back up to a fairly busy road, but in addition to the dog-yard fence (a little deeper than the 1/4 acre- I drew it on the photo-) we also installed a fence along the busy road.  We still have to close off the way-back from the front, but at least now if the dogs get out of the back fence, we've got a little more protection to keep them from the main road.

We moved in August, and I tried to watch where the sun was and was not during the day.  I had originally planned  to put the garden to the right of the yard, sort of behind the neighbor's house, but as I watched the sun, I learned that area was much more shaded then I had expected.  The evergreen trees are very tall and throw a huge shadow.  What I did see was the sunniest spot seemed to be just behind the fence.  I also pulled up the old aerial photos on Google Earth to try and find the shadows.  It was actually somewhat helpful as over the years the photos were taken during different months.

Because it does not rain much during the summer here, and we didn't water much (just a bit out front and enough to stop the hydrangeas from wilting), I also noticed that where the sun hit the most, there was very little grass and and it was a more bare, weedy spot.  It reminded me of the lawn in some of the hotter areas we've lived...  (lol).  While I do wish I had a handy sun calculator like the solar power guys use for site surveys, I'll just have to make do with what I have.  Noting the sparse growth meant I had some leeway once the rains came, to actually mark out the plot, as the grasses would all be green soon. 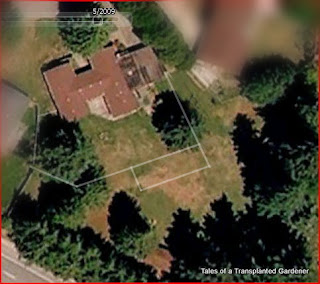 I drew in the "dog fence" and the proposed area for the main garden.  I also plan to include berries and herbs, though I don't have the details worked out quite yet.  I'm thinking herbs along the right side of the dog fence and the berries where I had originally planned to put the garden and in a little pocket of the way-back yard.  Eventually I would like to plant fruit trees as well, but that won't likely be this year. 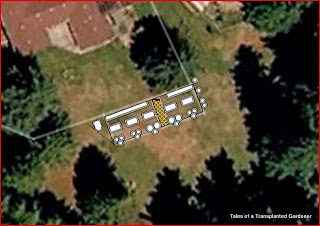 This is the general plan I have for the main garden.  I learned today that my estimation is off by a few feet and the two rectangular beds to the right of the path (the brown textured area is a path from the back gate to the old wellhouse (storage building) won't fit as planned, so I've got to modify the plan a bit, but it's a start.

Right before we closed on the house, hubby learned they were tearing down the building next to his work.  There was quite a bit of landscaping around it, and all the blocks were going to be hauled off.  We made, I think, three trips with our little utility trailer and brought home about 400 blocks.  We were pretty positive the closing would happen, so we took them straight to the house (which was vacant) and unloaded them out back.  Luckily, nobody had a problem with it, because we did not relish the thought of unloading them at the rental, then hauling them again.  We think they'll make nice, non-rotting, raised beds, and the price was right -just the cost of fuel to get them and our labor to load and unload. 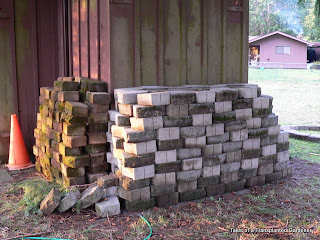 There is another stack around that corner too.

This is the ground view of the garden area. 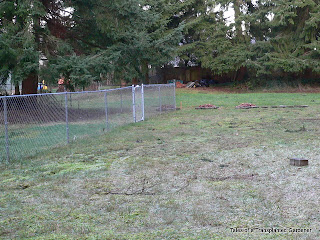 We've already got a few little rings built.  We have a rhubarb, that is hopefully still alive, that I actually dug from the garden in Colorado, which did survive its time in a pot, though it was not happy.  We popped it in the ground before I had much of a plan, so it's sort of on the wrong side of the fence, but it's fine.  The herbs may go along that fence line anyway, so it won't be way out there.

I also wanted to get some garlic in the ground, so we built two more little rings to go with it.  I noticed this weekend that the garlic has popped out of the leaf mulch already. 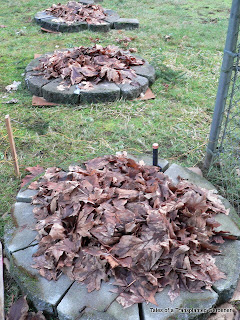 To build these little beds, I slightly loosened the soil by sticking a spading fork in the ground a few times and giving it a little wiggle.  That's it.  No digging.  Then I laid a piece of cardboard (hello moving boxes...) with ALL the tape removed, tossed a few forks of compost on there (uhm, yeah, we sort of moved the compost from the bin we had at the rental- we didn't move far and we were trying to clean everything up and frankly, it seemed like the best plan since it was unfinished).  We planted the garlic and covered it with some leaves I scrounged this fall.  Amazingly, with all the trees we have, almost none are deciduous.  We got some from a neighbor who was putting them out for the yard waste collection, and another from an older woman we met at the first HOA meeting we went to, who made a comment apologizing for her un-picked up pile of leaves since she'd had surgery. I got her address and we went over and scooped them up for her.  It was a win-win.
Posted by Amy at 2:32 AM No comments: