A Quick Catching Up...

First, please excuse the unfinished changes to the blog page.  I've still got some work to do on it, but I was so frustrated just trying to get the picture to fill the top section (which is now too blurry, but will just have to do for now) that I'm leaving it alone for the time being.

As you know, we sold the Colorado house summer of 2011.  It wasn’t financially pretty, but at least we got it sold, which at that time, not selling it was a real concern.  We moved to a rental house in Olympia, which was too small and turned out to be underneath too many trees.  We did a little container gardening that summer as my husband had started a couple zucchini on his apartment patio before I moved up here.  As we grew to really dislike that house, it did make us realize that when we purchased one, to really watch out for how much sun there was, not just for the garden, but also for the house itself.  We looked and looked, and even passed on a few that might have worked, due to lack of sunlight.  Then one day last summer, my husband calls and says to check out a new listing.  It was a house in our neighborhood (well, technically a neighboring neighborhood, but they’re connected) that a few times when we’d walked the dogs, he’d commented how much he liked it.  The house is very 1970, it still had red shag carpeting in the living and dining rooms, it had off-white shag in the bedroom (and still has, for now, blue shag in one bedroom).  We still have an apple green kitchen with brown appliances.  We had to do quite a lot of work, some of it unplanned (we discovered some water damage and found that rodents had just trashed what little insulation there was in the cathedral ceiling in the living room, so we re-insulated and replaced the ceiling).  We still have a lot to do, but it will take some time.  Here are a couple of pictures, but if you want to see more, click here, here, and here 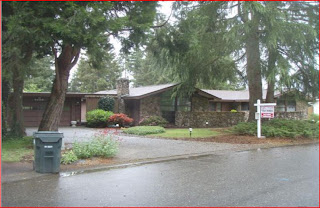 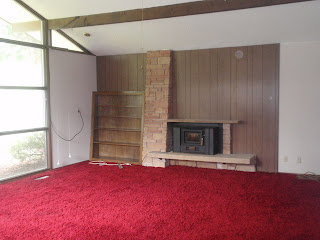 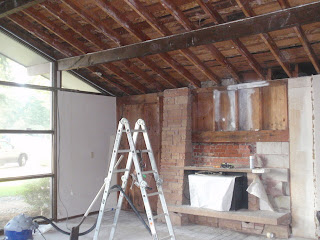 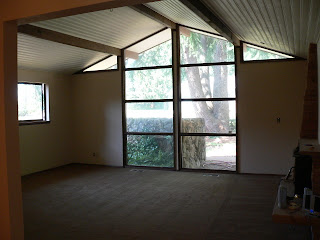 What this house DOES have, is an adjoining ¾ acre lot that the seller also owned.  It also has a well that used to supply the neighborhood (which is now on city water), but it is currently disconnected.  We will have to replace the industrial sized pump, which may or may not prove economically feasible, but it is my understanding that we can irrigate up to ½ acre without needing a water rights certificate.  We aren’t going to deal with the well this year, so we’ll work that one out later.  This house also has a nice sunny backyard, with a nice sunny deck and big windows to let the sunshine in.  Can you tell, sunshine is a very important asset here?

We fenced in a little more than the ¼ acre parcel that the house is on, extending back into the second lot, so the dogs could have a little bit bigger yard.   Last summer, I tried to watch where we had sun and where it was shaded throughout the day, and I actually had to adjust where I had planned to put the garden, as it was more shaded than I had realized.  We had a few more containers for the second summer, and as it turns out, I do much better in-ground than container gardening.

Sadly, in October, we lost our beautiful Gabby to kidney failure at the age of 18.  He had gotten very thin, and his bloodwork showed his kidneys were in decline.  We did what we could to help him feel better but he declined rapidly and in about a month, it was clear what was to come.  Gabby is the silver tabby. 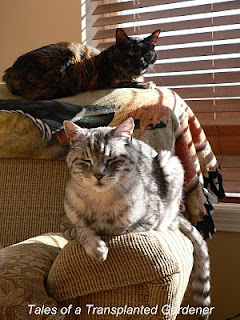 Later in the fall, we were leaving the grocery store and there were two kids outside trying to find new homes for a litter of kittens, and though we weren’t quite ready for it, and had not planned on it, we brought this little guy home. 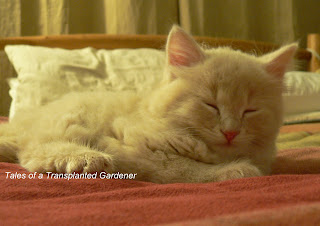 This is Fred.  He’s just about 4 months old now, and he’s a crazy kitten.  Annie, our 16 year old cat, is not thrilled with him yet, but I think she’s slowly warming up to him.  I keep trying to tell the little monster that she might like him better if he’d just quit touching her, but he’s a kitten, and he just can’t help himself.

Before Christmas, we learned our dog Wilson has cancer.  Because he is only 6 and to the best of our knowledge, the cancer had not yet spread beyond the tumor that was removed, he is undergoing treatment.  We are hoping to have him with us for a while longer.

So, that’s the quick rundown.

Pardon the mess, I was trying to update the blog with current location, information and photo, and apparently I need to do some reading to see how to fix this the way I want it.  I don't know what they did to Blogger but they sure didn't make it more user friendly.  I don't remember having this much trouble before.
Posted by Amy at 2:07 AM 1 comment:

I am working on my garden layout this week, and I will be coming back to the gardening world soon!!!