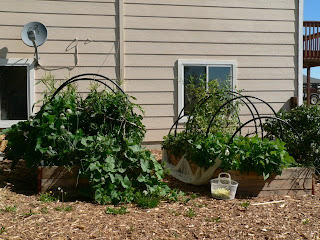 Here's how the garden grows by August. As you can see, I planted just a little too much in that west bed. The red onions have been pretty completely overrun by the cukes, tomato and zucchini. Notice the pile of straw in front of the potato bin. While I was out of town for a couple weeks, my husband was caring for the garden. He didn't realize that the potato bin was watered every time the sprinklers ran in for the lawn above. As they started to yellow, he thought they were dry, so he watered them some more... I tried to salvage them, but most were too far gone. Next time, the potatoes go to the other side of the garden! 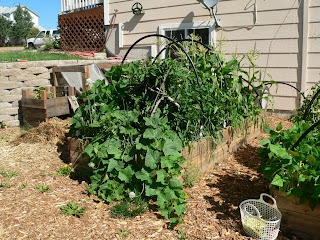 I started tracking yields in August. Before I kept track, the bulk of my green beans and sugar snap peas came in (I'd guess a few pounds, it's when I was gone & DH was picking). Lettuce, spinach, and radishes weren't measured either.
In August, Sept & Oct, I harvested (approximately):
6.5# yellow and green beans (mostly yellow)
30 cucumbers 6-8" about 13#
20 zuchinni 6-8" about 11#, and about 4# baby ones before the freeze
2 dozen ears of corn (varying quality though - need to work on those a little...)
3# carrots (not very sweet though)
20 tomatoes, not so great ones, we're trying some other varieties next year.
6# onions
about a dozen (3 1/2# I think) peppers (immature/green & purple)
and one unripe watermelon, plus a tiny almost ripe one...
I am going to make a real effort to keep track of both my costs and my yields next year, to see how it pencils out.
Although there were some flaws in my planning, and a couple of mishaps along the way, all in all I felt it was a successful garden. By the end of summer, I decided to plan an expansion...
Posted by Amy at 1:06 AM 2 comments: 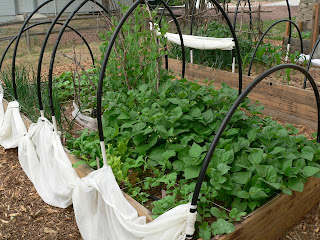 I planted the garden in stages between the end of May (19th) and mid-June. Here's a photo of the east bed with radishes, lettuce, spinach, peppers, Walla Walla onions, green beans, sugar snap peas and yellow beans. 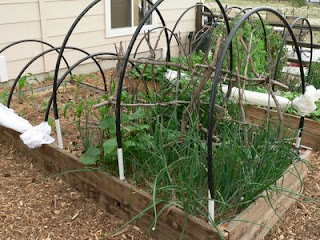 The west bed with red onions, cucumbers, a bush tomato plant, zucchini , watermelon ,and the beginnings of the corn. The corn didn't germinate very well, so I had to replant it.

This is the garden with its protective covers (aka sheer curtains from the thrift shop over irrigation tubing). We are very likely to have hail during the early summer (as my neighbor warned me) so this is how the little plants were protected. As you can see, I also added mulch around the beds which we can get for free during the summer here. 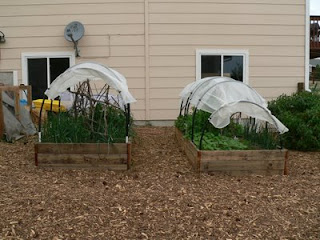 Here are my little potatoes, growing nicely.... you can see the 2-section compost bin as well which is built from salvaged 2x4s and used chicken wire. 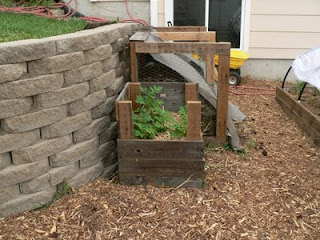 Building the raised beds May 2008

When I first looked at this house with our Realtor, I picked out the spot for the garden. There's a spot that isn't in the back fence with the dogs, but also isn't in the front yard in full view. It's on the south side of the house and is pretty well screened from the street behind a retaining wall.
I decided one week in May that I was going to try raised beds, a first for me. I learned about lasagna gardening online, and thought it sounded worth a try. After a lot of internet searching and a lot of reading on the Gardenweb forums, I decided to get started. I found used redwood 2x6s for free on Craigslist, and started on the plan! The beds are 4' x 10' and 3 boards high (about 15.5"). Each corner has a piece of wood that I screwed the boards into, as some of the board ends aren't in the best shape. I also added a piece of 2x6 inside the center of each long side. This adds stability and helps pull the somewhat warped boards in line with each other. Building with used lumber can make for interesting projects. It may not the prettiest up close, but it serves its purpose well. I lined the wood with plastic sheeting in the hopes that it will help it last longer.
I filled the beds with what organic materials I 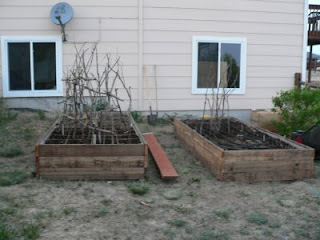 could find at the time. The bulk of the filling is well aged horse manure (came chock-full-o'-worms too) that I got from a family who lives a few miles up the road. They advertised the manure free on Craigslist. I started with a layer of paper and layered chicken manure (that was at least 6 months old if not older), leaves and pine needles, horse manure, coffee grounds, coffee chaffe, and a little fill dirt. I don't remember the exact order, but I tried to keep the layers to about 2-4" thick and alternate "greens" and "browns" as best I could.
The photo shows the 2 beds after they were filled. The sticks in the right bed are for the peas and in the left bed is my makeshift stick trellis. All of the materials for these 2 beds I got free through Craigslist and Freecycle or were items I had on hand. I also built a potato box from old fence boards and 2x4's. The plan was to mulch the potatoes with straw and add the 2 open sides as the plants grew. I left the back side intact since it was against the retaining wall. I left the right side intact because the compost bin will be going just to the right of the bin.

I live and garden just east of Colorado Springs, CO. I moved to Colorado in December 2007, and I started my raised bed vegetable garden last summer. I grew up in Vermont, and have lived in other western states, but my garden here is subjected to more extremes than gardens past. Just this past week, we have seen temperatures between -6F and 70F!! This year, I am expanding the vegetable garden with additional beds and adding berries and fruit trees. I am also planning a flower garden for the front yard and some plantings for the back.

I'm going to start my story with last summer's garden.
Posted by Amy at 12:00 AM No comments: