Things Are Looking Up!

July has brought us some rain followed by warm temperatures and it's really starting to show out in the garden now. My zucchini are still alive (yay!!) and are starting to get a little bigger. It'll still be quite a while before I get any but the farm stand opened last weekend (I'm so glad they're back!) and they have good zucchini. I've gotten a few zuccs, cucumbers and sweet onions from them this week. I'm going to try out the corn later this week. 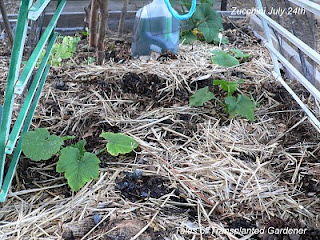 The pattypan is still small but has some baby squash starting on it now. The plants were pretty small last year but I thought it was due to being in partial shade. This one is in the sun and is still small. I'm thinking they're just much littler plants than zucchini. 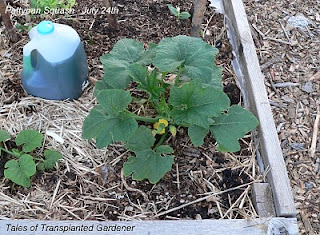 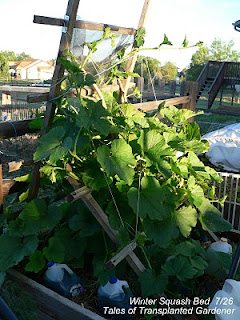 The bush beans have taken off too. I'll give you one guess which section has started to produce this week... 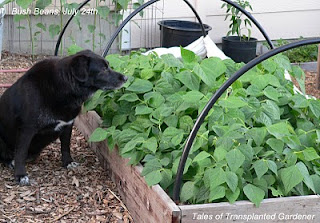 I've got these caterpillars on one of my young trees in the back yard. Anybody know what they are? The biggest ones are about an inch and a half long. 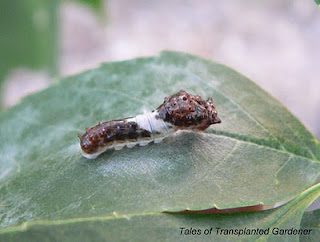 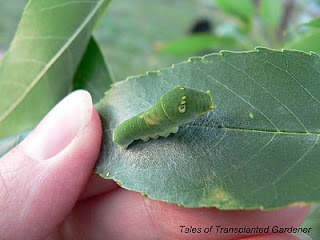 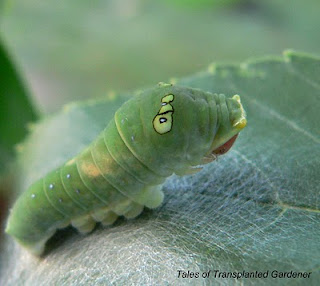 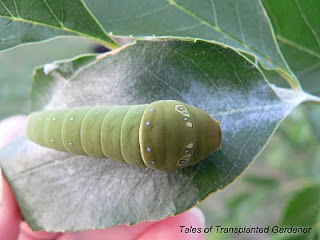 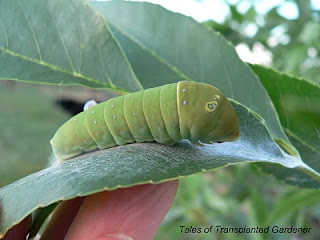 Sorry about the whining in my last post. Thanks for "listening" and I appreciate your sympathies. I was having a moment that day...

I know I garden in a challenging environment. Probably why the neighbors looked at me funny when I built the garden (though I'm really glad I did!!). I came across this edition of our little town paper the other day (sadly, it's been hanging around in a pile of stuff since May. It's taken it's proper place in the recycle bin now.) Somehow, this headline gives me a feeling of validation... 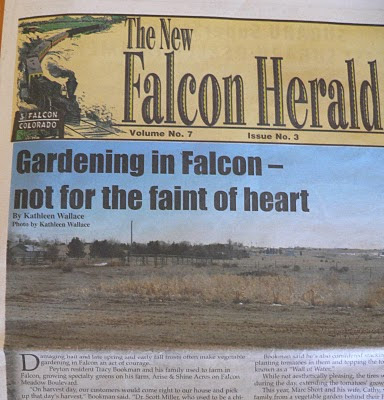 Things are looking better out there this week and I replanted beans and peas today. I should still have time for a good crop of bush beans though I hope I'm not too early on the peas. We'll soon see (it's OK if I am, I have more seed...).

Email ThisBlogThis!Share to TwitterShare to FacebookShare to Pinterest
Labels: Falcon

Year three with my garden is turning out to be a frustrating one. Spring was long and cold. May and June were very very dry. July is bringing some rain and hot days but with that also comes the risk of hail. Here's our little hailstorm July 4th... It came with over an inch of rain and we didn't get the big bad hail that some others nearby got, so I guess I won't complain. 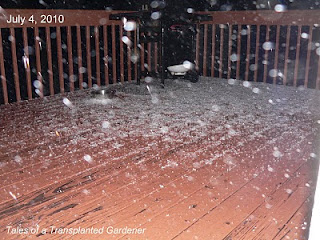 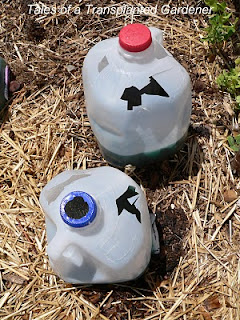 These milk jugs didn't really appreciate that hailstorm though they were likely brittle from the sun exposure though. They are on season 2 of use. 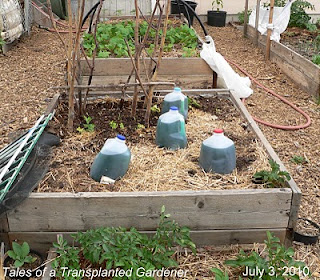 This bed probably bothers me the most. This should be full of zucchini, pattypan and pole beans by now. The indoor started zucchini didn't survive a strong windstorm early on. The direct sown seeds either didn't sprout or were immediately eaten by the bugs. The indoor sprouted zucchini seeds were eaten. I just planted out some indoor starts yesterday. They were still there today so I guess there's hope. At least 2 of the new ones already have their first true leaves so hopefully they're big enough to survive. I've planted the pole beans I think 3 times. These should be Rattlesnake and Zi 28 Long beans. Today when I looked, I do see a few new sprouts so maybe...

Same story with the other pole beans (I think Kentucky Blue and Blue Lake maybe?). I tried to presprout some in the house like I've done with peas but it didn't work so well. I've replanted AGAIN and fairly heavily. Hopefully something will survive and be able to produce before frost. 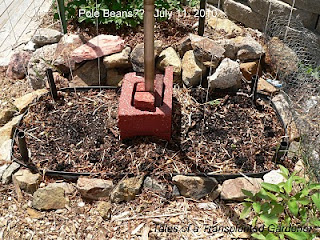 Even the bush beans are having some trouble. This year, instead of my normal spacing of about 9/sf, I thought I'd try out wider spacing. I planted them about 6" apart or 4/sf this year. Unless the surviving plants produce like crazy, I think I'll go back to my previous method. At least that way, when a couple didn't make it, there wasn't a huge gaping hole where a plant should be. I'm going to replant the empty spaces sometime this week. 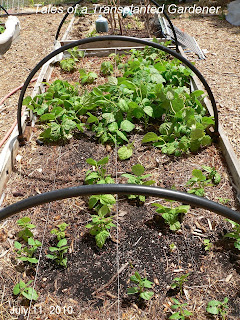 The tomatoes were doing well until something came along and chewed the stems. I lost 2 this way last week. The others seem to be doing well though a few of them are very small still. The Galinas Gold Cherry and I think the Thessaloniki are growing well at this point. 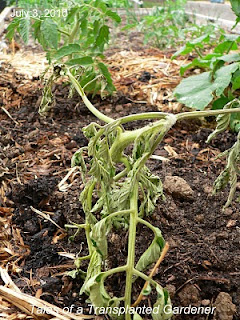 This half bed should be full of broccoli and cauliflower. Sadly, right after I gave away my extra starts, I started losing plants. I'm not expecting to see any broccoli though I may get cauliflower. 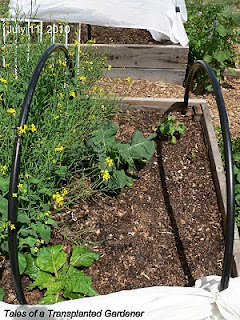 Finally, my carrots did not do well at all. With the dry windy weather, I guess I just didn't keep them wet enough to sprout. I have about 3 carrots from 4 squares that sprouted. So sad. I sprouted some indoors (wet coffee filters) and put them out today. Perhaps they'll survive... 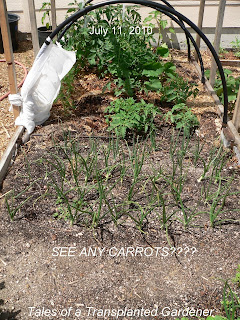 I guess, on the plus side, the onions are doing well this year, much better than the past 2. Of course, I mainly use onions when I cook zucchini...
Posted by Amy at 10:50 PM 8 comments: