So there's this big pile of poo in my backyard...

Fall is the perfect time to find straw bales for free. First round just after Halloween, second round right after Thanksgiving. I am planning to convert part of my front lawn to a flower garden, and plan to use straw as part of the process, so I was on the lookout for free bales. I did a good job finding it, maybe a little too good... I really probably had enough when I had acquired 13 or 14 bales, but then there was this ad on Craigslist, a church that had about 40 bales to give away. I went planning to pick up about 5 more bales, but there was this nice man who arrived while I was loading my truck. He was sure we could fit more in there. By the time we were done, I had 9 bales of straw in the back of a short bed, stepside GMC Sierra. He even put one on top of the toolbox. So now I have about 23 bales of straw just sitting there until spring, so I got to thinking (that often means trouble by the way...).

I decided to put some of my straw bales to good use. We used 16 bales to build a temporary compost bin. Then we took a trip to the horse boarding stable where our helpful horse folks kindly used their tractor to load the trailer for us. He topped it off with a scoop from the spoiled hay pile, just for good measure. We brought it home and built a pile. My intent was to build a pile ala Soilguy's methods (for those who follow the Soil, Compost & Mulch forum on Gardenweb.com) but because of timing and weather (when hubby offers to help you go get a load of horse manure, you go whether you're quite ready for it or not) I didn't really get all of the information I needed beforehand and I wasn't able to water the pile because the weather turned too cold. So, here's what we did... 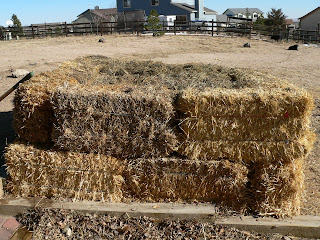 The straw bin is 2 bales wide, 2 bales high (turned on their sides) which gives an interior space of about 5'x5' and around 3' tall. I put a layer of hay on the bottom and layered hay throughout the pile. The load contained both manure and paper bedding from the stalls. I was unsure what the brown:green ratio was so I layered in hay in case it was too much "green". I tossed a layer of leaves in there as well 'cause I had some aspen leaves that just wouldn't shred this fall. 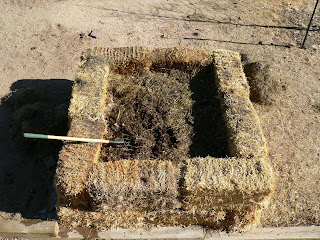 Then, I "capped" the pile with another thick layer of hay. This was to serve two purposes, as some added insulation (we built this pile December 30) and to keep the odor down since we do have neighbors. 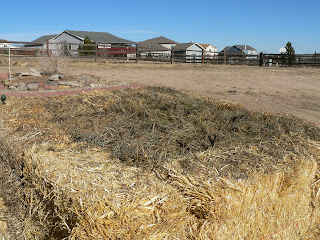 (check out that nice, lush backyard I've got... yep, another project!)

If I had followed Soilguy's methods a bit closer (it would have still been a modified version of his methods) here's what I would have done. First, lay down a layer of plastic to keep liquids from leaching out (ideally using a trench to collect the liquid to add back into the pile). Then I would have watered the pile really really well (wet is ok) and tamped down the edges to "seal" the pile. I should have closely monitored the temperature, and not allowed the pile to get above 150 degrees, and turned it when it cooled to 105-110 degrees. That's the short version.

What I actually ended up doing was adding some water when the weather warmed in a couple days (but I don't believe it was watered deeply enough) and then I let it sit and cook for about 3 weeks. When the weather turned nice again, I decided to turn and water the pile. What I found was it was quite dry throughout (not a real surprise) and I probably didn't need to add the hay when I built it. I saw quite a lot of paper bedding and not many horse apples. I added the bag of bunny cage cleanings I had picked up the day before and about 15 various sized bags of Starbucks coffee grounds I'd been stockpiling and I watered it in hoping to get it "cooking" again. I have also been dumping a couple gallons of dishwater on the pile most days. I have gotten the pile heated again, but since I've been a bit of a slacker, and have not actually purchased the compost thermometer I should have, I don't know the actual temps. I do know it was hot before since I had a meat thermometer I tried to use (we never use that one in the kitchen) but then it quit working. I had a reading around 140. I figure, it no longer smells like manure and it has several weeks to sit before I'm going to use it so I'm not too worried. Most likely, this is going to be used on ornamentals rather than edibles, so I'm even less worried about the time & temp.

Just a note to fellow dog owners: If you have a large dog who finds horse manure and similar items to be a tasty snack, they will find a way into this bin eventually. After I turned the pile, my two lovely lab mixes decided to take a bit more of an interest. I never caught them in the act, but they started flipping the top bale off the pile and onto the ground, making the goodies accessible to them. As I was trying to dog proof the pile, my young one decided to show me his jumping skills and hopped up on top of the stacked bales where he stood trying to lick my face as I worked. Lovely children... 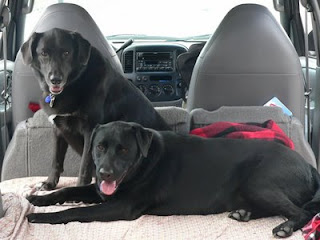 Veronica & Wilson, my charming companions in one of their favorite places.
Posted by Amy at 11:50 PM

Way back when I had a "real" garden (about 1/2 acre of lovely, wide raised beds) I also had a friend who had horses. My compost pile consisted of anything she would bring me, which was straw/manure blend, and whatever greens I removed from the garden. I paid no attention to browns and greens, it got sprinkled with big Rainbird impulse sprinklers when the garden got watered, it was turned whenever I happened to think about it....and it turned out just fine. In fact it would get so hot I sometimes melted the bottom edges of my bell bottoms when I got in there to turn it (yes, it was THAT long ago!)

Great idea! I never thought of checking on craigslist for bales of hay. I'd love to store them for spring when I've got tons of grass but no browns. And I've heard about using bales for a compost bin, also for raised beds, but I've never seen them. Well done!

Granny, I agree, even if I did nothing, I'm sure it would turn out fine. Seems I kinda like to play in the compost...

Thanks Sinfonian! I've read about using them to plant into as well, but I'm afraid they'd dry out so fast here, I don't know that I'll try it.

What a great idea using the bales to contain the pile! Kudos!

Hi Amy. I linked over here from FB. How interesting that you are doing all of this gardening! I have a soft spot for labs, too. I used to have a black that died about 2 yr ago when she was 9 and I still have my yellow who is 13.

Thanks Amy. After our first, a lab/chow mix died at 9, I said I wasn't getting another black dog... Then I saw the adoption pictures of Veronica and her sister Val, that went out the window. Wilson is LabX #4...