Last year's garden was an experiment for me. It was the first at this house, my first in Colorado (at 7000'), my first raised bed garden, as well as the first time I have used so much organic material for planting. Although there were some flaws in my planning, I feel it was probably the most successful garden I have had. I also enjoyed it very much, sooo... I expanded it! Here are a few photos of the new areas. I labeled some of the photos, if you click them, they should enlarge.
In my original plan, everything was screened from the street by the retaining wall. With the new beds, that wasn't possible anymore, so we added a little fence to keep it looking neat from the street. I purchased the fence and the posts used. I think I spent about $50 or so including primer and paint ($15 for fence, $12 for posts). I admit, cleaning up the old fence took longer than I would have liked, but I would have spent $50 for the fence alone if I had purchased new materials. 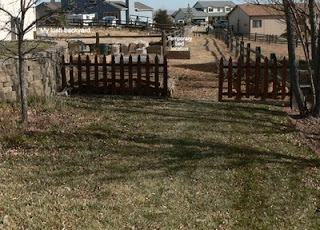 This is the view from on top of the retaining wall. Just past the compost bin are the two beds I built last year. There will also be two 4'x4' and a third 4'x5' bed against the fence. There are 3 small lilac bushes there now that I plan to move this spring. The 4x4's are already built, they are just temporarily on the side of the fence (in the "alley" as I call it). There is also a 2.5' x 11' bed that sits low to the ground by the neighbor's fence. 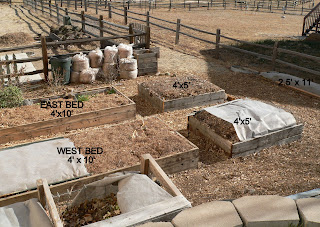 The new beds expand the garden from 80 square feet to almost 200 square feet. I am also planning a second potato bin and I am planting the zucchini outside of the regular beds this year. We're using some metal landscape edging formed into a circle in a few spots around the area for the zucchini. I decided to give them their own space and use the bed space for other plants.

I topped off the original beds with a layer of horse manure, leaves, pine needles and coffee grounds (UCG) as last summer it shrank down by about 6 inches. Part of the west bed is covered with a piece of landscape fabric, as is one of the 4'x5's, (mostly because I had the fabric). I have noticed that in the original bed, under the fabric, there are worms just a couple inches down in the leaves, even in January. The 4'x5' beds are filled with weeds from the backyard, manure, leaves, pine needles, spoiled hay, straw, UCG, and pumpkins. There are also some pumpkins buried in the east bed. The 2.5'x11' is filled with weeds from the backyard, rabbit manure, hay & cage cleanings, and some leaves. Where I used the weeds, I wet them and put them under clear plastic (some in the beds, some in bags) and let them sit in the sun to hopefully kill the weed seeds. I used the weeds at the bottom of the beds. Since I'm not tilling these beds, the seeds shouldn't see the surface to sprout. We'll see how that plan goes...

Here's another view of the garden area. 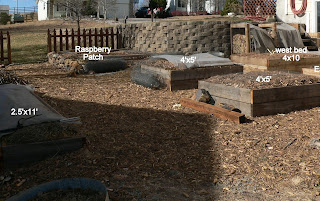 I am also planning to add a raspberry patch. We had so many raspberries at our house in Alaska, I miss having them. Really, I would like to have raspberries (yellow & red), blackberries and black raspberries, but I'm just starting with the red & yellows. They are actually the only types recommended for this area (according to the CSU website), but I think I'll see if I can get the others to grow here as well. I'm also going to put in a couple of rhubarb plants. 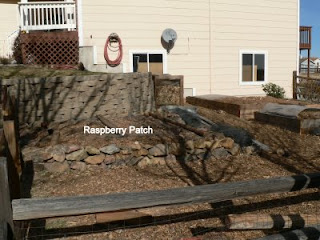 So, that's the end of the expanded tour.
(I do hope I didn't get carried away! )

I love it when you get carried away!

I envy the access you have to our gardens. I have to haul everything from the front driveway to the back yard by wheelbarrow, then bucket it over the short fences. I'm working on Mr. H for an expansion, which wont help with getting materials to the back yard, but will allow me to maneuver a wheelbarrow ino the garden areas.

Anyway, it's all looking beautiful. I'm getting excited for you to start planting!

Granny,
Looks can be deceiving though. The closest I can drive to the garden is inside the back fence. If you look at the 2nd picture, there's a concrete patio and a pile of mulch toward the top left. That's as close as I can drive. There's a sprinkler system for the front lawn, and I don't think you're supposed to drive over them (I don't think I want to know if I'm wrong though). It's not very far, but a pain with the gate (and dogs that like a good run).

When I built the first 2 beds, I didn't dare drive the trailer into the backyard (we've discussed my trailer skills before...) so I hauled it all from the driveway, one cartload at a time...

You should look at a dumping garden cart. I have one instead of a wheelbarrow. I use it so much. I can move a lot more material at once also. I like it so much, my sister & I got Mom one for Christmas.

Mr. H insists he's buying me a cart to tow behind the riding lawnmower this year. I just need to figure out how I can get closer to the garden beds with it, as they are surrounded by "puppy fencing". It's not just the big dogs that enjoy helping out in the garden and compost pile!