After a few days of beautiful weather this past week, we've had some noticeable growth around the yard and garden. This is one of the lilacs (all the photos were taken yesterday-Thursday). This one is out front, and hasn't been moved (yet) like the others. The ones in back are doing well and are just a smidge behind this one with their blooms. I did have to water the transplants with the hot weather (mid-80's) we had. When I felt under the mulch, it felt wet, so I wasn't sure at first if they were wilted because of a lack of water or too much. I watered just a little and they perked back up, so they must have been dry in their reduced root area. 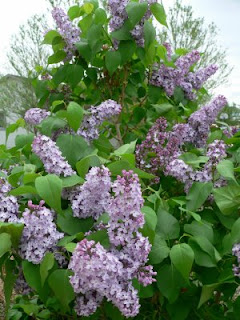 Look at the peas!! I can't believe how they've grown in just a week! This photo was taken 5-21. The photo in my last post was taken 5-15. They are starting to bloom so I should be eating Sugar Snaps soon!

I was able to harvest a little from the salad greens this week. The baby lettuces I set out are being a little slow but I expect they'll take off soon. 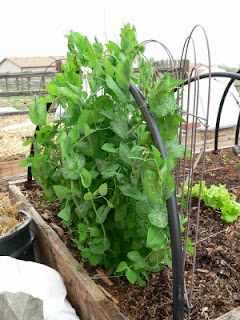 These are the potatoes in my bin. I added a little straw around them today. I think I'll be adding the first board later next week. 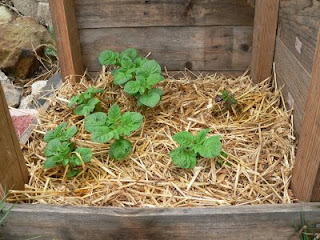 These are the tomatoes in ring#4. When I planted the tomatoes, I messed up my planting plan a little. There were supposed to be two Galinas Gold Cherries. One of the cherries didn't make it so I just had the one toward the back/left to plant here. When I planted the rest, I separated the plants by type - cherry, slicer or paste. After I planted all the slicers (using all the available space for them) I realized I had mis-categorized one plant. I had confused the Imur Prior Beta as a paste instead of a slicer. I had started Roma and Paquebot Roma for paste, so I knew there were 2 kinds but I forgot the Paquebot start didn't make it. I plunked the Imur Prior Beta in with the Galinas Gold Cherry. So much for being organized... 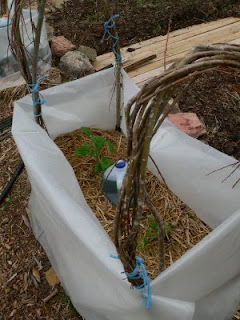 The plastic is to help create a little bit of a microclimate for the plants. The day I planted them was really windy and our nights are still pretty cool (40's mostly) so I figured a little extra protection might do them well. All of my more tender plants have some sort of protection, it varies from bed to bed right now. I uncover some plants more often than others but none require daily attention . So far, so good. The Galinas was starting to flower but I pinched the blossoms. I'll leave the next ones, I just felt like they should be in the ground just a little longer before trying to set fruit. 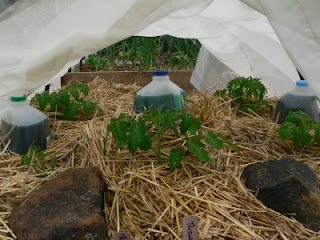 These are the slicers, well, they're at least not cherries or pastes... I couldn't say for sure that slicer is the correct term for all of them, but it works for me. The 2 on the left are Kellogg's Breakfast, a yellow variety. The center 2 (one must be hiding behind the jug) are Thessaloniki (Red) and the right front is Rutgers (red) and back right is Neves Azorian (red). 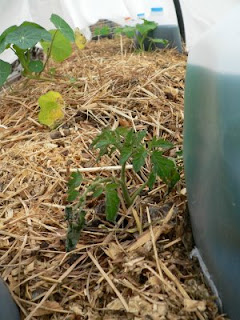 The poor little Black Cherry was really looking bad last week. I didn't think it was going to make it but it is looking much better this week. It might survive after all! 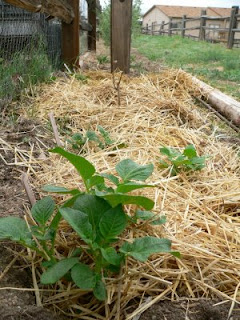 This is the same potato I posted the picture of last week. I added some straw around this guy today too. This is one of the "overflow" patches. If you look closely toward the center, you can see the stick that is the grape- the intended resident for this space. It is also showing signs of life. You can see one of the posts I put in this week for the trellis. I set posts for the grape and the blackberries. I used wood from a split rail fence my neighbor removed. I used the posts for the grape and the rails for the blackberry. I still have to install the raspberry poles but I 'm using T-posts, so while I'll have to install more of them, the installation will be less involved. It was a little tricky for me to cut off the excess height on the tall ones (alone). I got it done though. 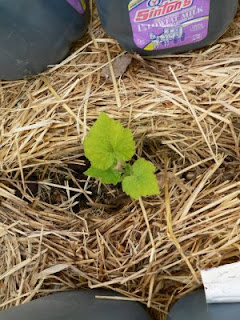 The zucchini I transplanted isn't looking so great. I removed two very yellow leaves before I brought the camera outside. I think it is too wet. I spread the straw mulch away a bit more and I think it looks like it might recover . I have started some more seed just in case. While most things really needed the rain we got today (almost an inch), the zucchini probably wasn't one of them... The grass should be much happier though. 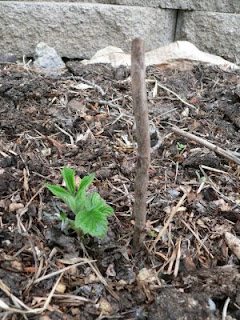 I'm also seeing signs of life in the raspberry patch. This is one of the Canby Raspberries. I have growth on 2/3 of the Canby and 2/3 of the Caroline. The Anne that looked so impressive when they came in, aren't doing anything yet. One of the Triple Crown Blackberries has sprouted as well and leaves are starting on the apples and peaches. The asparagus is finally starting to appear and the Honeoye Strawberries are still looking good. They are starting to bloom. I have read mixed advice about letting June-bearing strawberries produce the first year (some even said they won't). I plucked the blooms from half. I'm going to let the other half do what they want.

So, that's the update for this week. I started moving the phlox and tulips today but was interrupted by a rather nasty thunderstorm. I have a graduation to attend tomorrow north of Denver, so the rest will have to wait until Sunday.
Posted by Amy at 9:20 PM

Everything (well, maybe not the poor zucchini) is really growing well! You and I have a lot of the same varieties in tomatoes, as well as the Canby raspberries. I didn't think mine were ever going to look like anything but dead sticks, but now they are growing and sending out new canes and even blossoming.

I am really looking forward to the berries!! Caroline and Anne are fall bearing, so hopefully I'll get to sample some this year.

Hi Amy! Greetings from your neighbor in northern Wyoming!

Your peas look so good!

Our lilacs are just starting to bloom too!

We just had a beautiful soft rain this morning and now... later afternoon... it's sunny & beautiful!

Hello! Thank you for your beautiful & informative blog. im pretty amazed by the things you already have growing.

Im sitting in my living room wanting to put in my garden, since the danger of frost has passed.. but its so rainy and chilly. I simply do not know what to do. Are there some varieties (like maybe the squash family) that I should hold off on? If im planting from seed do you think the ground is warm enough for them to germinate?

thank you kindly for your advice. I live and garden up in east burke, vt.

Thanks and happy gardening!!

Marysia,
Thank you for your kind words. I'm not as familiar with the climate nuances in E Burke (I'm from Milton just fyi), but I'd bet by now, you're warm enough to plant. I just looked at your forecast and while you don't have quite the intense sunshine we do, your temps look very much like ours. I'd say go for it! I think your nighttime temps will pick up pretty soon (probably more than ours will) which will help too.