The downside to feeding the worms

Today, I was out planting the second round of beans and I saw something that gave me a bit of a scare (not as much as something else I heard today, but I'll get to that in a minute). Right behind the peppers' covered area and actually under a piece of chicken wire that was laying on top of the straw, I saw a clump of what I am quite sure is bunny fur. Then, I looked across the bed and saw this raised area. It's a little hard to see in the photo because of the straw, but there was a hump 6-8" or so high where the yellow beans are supposed to go. I had a moment of panic, thinking there was a bunny nest in my garden bed and I have seen spots in the mulch out back that looked like bunnies were starting to nest. I resisted the urge to immediately dig into the mound (though I'll admit, I did peek) and went inside to get my camera. 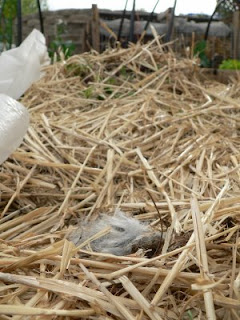 Thankfully, I don't have a bunny nest.

What I do have is lots and lots of squash or pumpkin sprouts (still, much easier to handle than cute little baby bunnies though I'm not quite sure what to think of the fur). 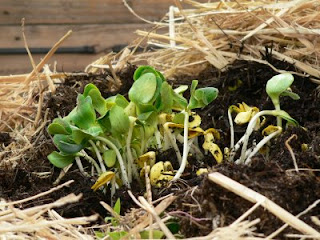 I guess we shouldn't be too concerned about planting Curcubit seeds too deep... 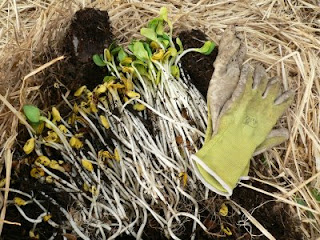 Don't get me wrong, it DID occur to me last fall that this could happen - I didn't put any squash in the bed I where I planned to plant similar plants come spring, but I didn't really think they would push up such a big area on their way up. I found another mound toward the north end of the bed, where I have corn starting to sprout. I reached into that one and tried to pull those loose without disturbing the corn too much then smushed it back into place. We'll see how effective that was before too long. 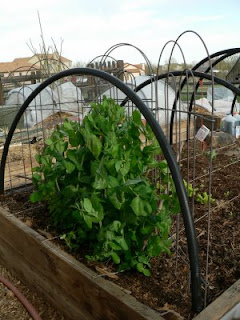 and here they are today! 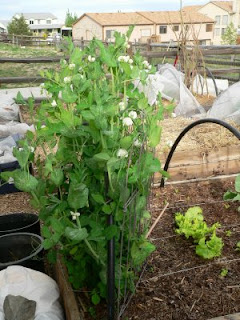 I can't believe the height change in two weeks. The hoop and the brown wire fence visible above are still in the same spot, just much harder to see. For a good reference, check out the hoop behind the peas (over the lettuce). No peas yet, but there are more blooms. The weather has been cooler this past week though today was the first of several (forecast) warm days, so the plants should be kicking back into gear again.

The beans are starting to sprout. These are the Rattlesnake Beans but some of the Landreth are popping up as well. I'm really really hoping I didn't make a mistake with the sticks I used here. These are prunings from the neighbor's Austrees, a vigorous tree of the willow family. They had been removed from the tree for several weeks and to (hopefully) be on the safe side, I peeled all the bark from the bottoms of the branches. I'm worried though because the branches are starting to bud out again. I don't know if it's stored energy in the wood or if somehow they are sprouting roots?? Is it possible for them to grow even though I peeled them?? 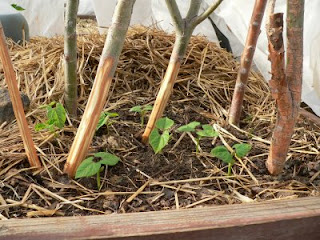 The direct-sown zucchini I planted under plastic in Ring #2 sprouted early this week. I had 3 sprouts under there Tuesday (when I was telling the neighbor what was planted where) but when I looked yesterday, I only had two!! One was completely missing and another has a couple holes in it's little leaves. I forgot to check on them today, I hope the others are still there.
My Black Seeded Simpson Lettuce I sowed in the milk jug this spring http://transplantedgardener.blogspot.com/2009/04/photo-update.html was split up. Some went into the garden and some are living in yogurt cups on the front porch waiting for my friend to build her garden where they are supposed to be living. Maybe the ones in the garden have been busy growing massive roots or something, but I may have to steal one of Andrea's plants for a comparison. So far, hers are bigger than mine, and she doesn't even have them yet!

Lettuce in the garden... 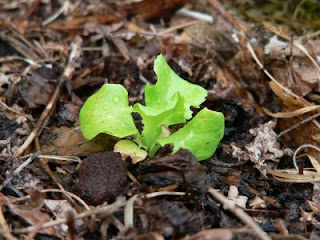 Lettuce on the porch... 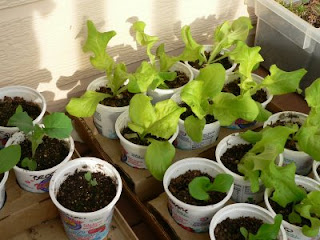 It didn't make it into the photo, but her spinach is bigger too. I may just squeeze one of these into the garden to see if I should leave mine on the covered porch longer next year. The porch plants don't get as much sunshine but they probably warm faster because of the containers and stay warmer because they're up next to the house.
Oh, I almost forgot to tell you my scarier story! I could see from my house that one of the neighbors on the street behind us was having a garage sale today (the house in the distance in today's pea pic). I stopped by on my way out to run errands today, in part to see if there were any goodies I needed and partially as an excuse to meet them. I get a chuckle sometimes as I hear her yelling at her dogs when they take off - hers listen about as well as mine do! Anyway, we chatted about the dogs a little (she notices Veronica's impatient yelping at the door - it is a bit different for a big dog. I mentioned to the husband that Wilson was obsessively barking at something last night (every time he went out the door, he ran out barking- several times in a couple hours) when he tells me he heard something going up the street past his house one night that he really thought sounded like a MOUNTAIN LION. I'm not actually sure what he meant - what the sound was - but he said it was distinctive.

So I went about my merry way and later on, I spotted the neighbor behind us out in her backyard (the other house you can see in the pea pic). I wandered out to say hello as I haven't seen her for a while and told her what the guy across the street told me. She told me that about a month ago when her brother was in town, they were headed in to register their ATVs (they recently moved here) one morning about 8:00 and as they passed the open field at the edge of the neighborhood (about 1/3 mile from my house by road, shorter as the crow flies) they both saw a large animal, reddish/brown color with a long tail, out in the field. They thought it looked like a cat but didn't think they lived out here. When they were at the office (wherever you have to register ATVs- I don't actually know here) they were looking at the mounts there and became quite convinced that they had in fact seen a mountain lion.
Having TWO people tell me this kind of information in the same day is incredibly disturbing to me. I thought the most dangerous wildlife we have here is the fox. Mountain lions are one of the scariest animals around. I think I'd rather have bears.
Posted by Amy at 9:40 PM

OOOH that is scary. No, don't wish for bears. Mom has them and they destroy everything in their sight including front doors, windows and cars.

We had a cougar roaming around our little AZ town last year. Between that and the coyotes and rattlesnakes, I pretty much stay inside after dark, and never let my dogs go out alone after dusk! I feel much more relaxed in my WA home where we don't have to worry about any predators.

Nah, I'm not really wishing for bears, just the thought of stealthy big cats scare me. I read that they can have a huge home range (over 300 sq mi sometimes) so I'm going to try to pretend that it was just passing by and doesn't really live here or maybe it was never really here. Ignorance is bliss, right?? I do keep the cats in at night and the dogs are usually inside as well anyway. I was thinking about it earlier, I've probably camped and hiked in lion country lots of time and never even thought about it, so I'm going to try not to be paranoid. I couldn't help it last night, I locked the dog door and it was such a pain this morning when the dog wanted out and then back in, before I was up (please nobody tell me bad stories that will make me nervous about the dog door, I don't think I want to know.)

Hi, there! I came across your blog because of the square foot gardening forum. Neat stuff!

Anyway, I just noticed your comment about using willow sticks that you stripped the bark off of. That's actually a method for propogating trees! You may have unknowingly given the cuttings a perfect rooting environment, so if they are showing signs of life, yank those babies out!

(I hope I don't sound bossy...I just wanted to share.)

Keep up the good work!

Thanks Katy, I did yank those guys! So stripping the bark REALLY didn't help! I didn't know that. I was thinking it would do the opposite.