We had a couple nice sunny days earlier this week, so I wandered out to the garden to see what was happening out there.

I poked under the mulch in the main potato bed to see if they were sprouting yet, and I found this: 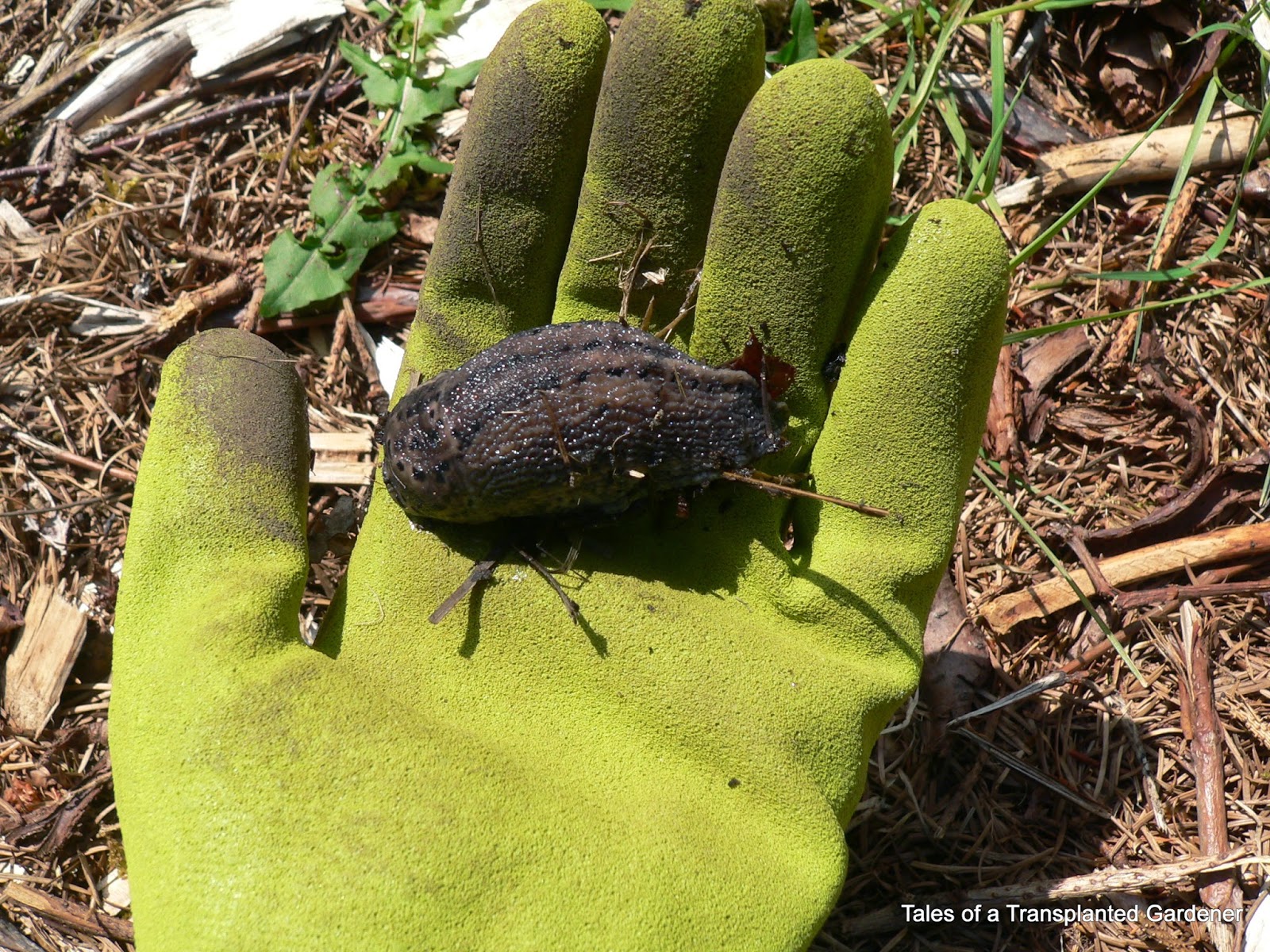 That would be a big fat slug.
It kept itself shrunk up like that, so I don't know how long it was when moving, but I'd guess 4-5 inches.
We've got some of these big guys, and some little tiny grey ones, and probably every size in between.  I broke down and sent the husband to buy some Sluggo a couple weeks ago as they were defoliating the newly planted strawberries about as soon as the new leaves popped out.  They also ate all my lettuce seedlings I had started.and had set under a makeshift coldframe (an old glass shower door).  I replanted but this time I kept them on the deck.  The slugs will come onto the deck as well, but I'm keeping them closer to the door, which is probably across more lumber than they'll traverse. 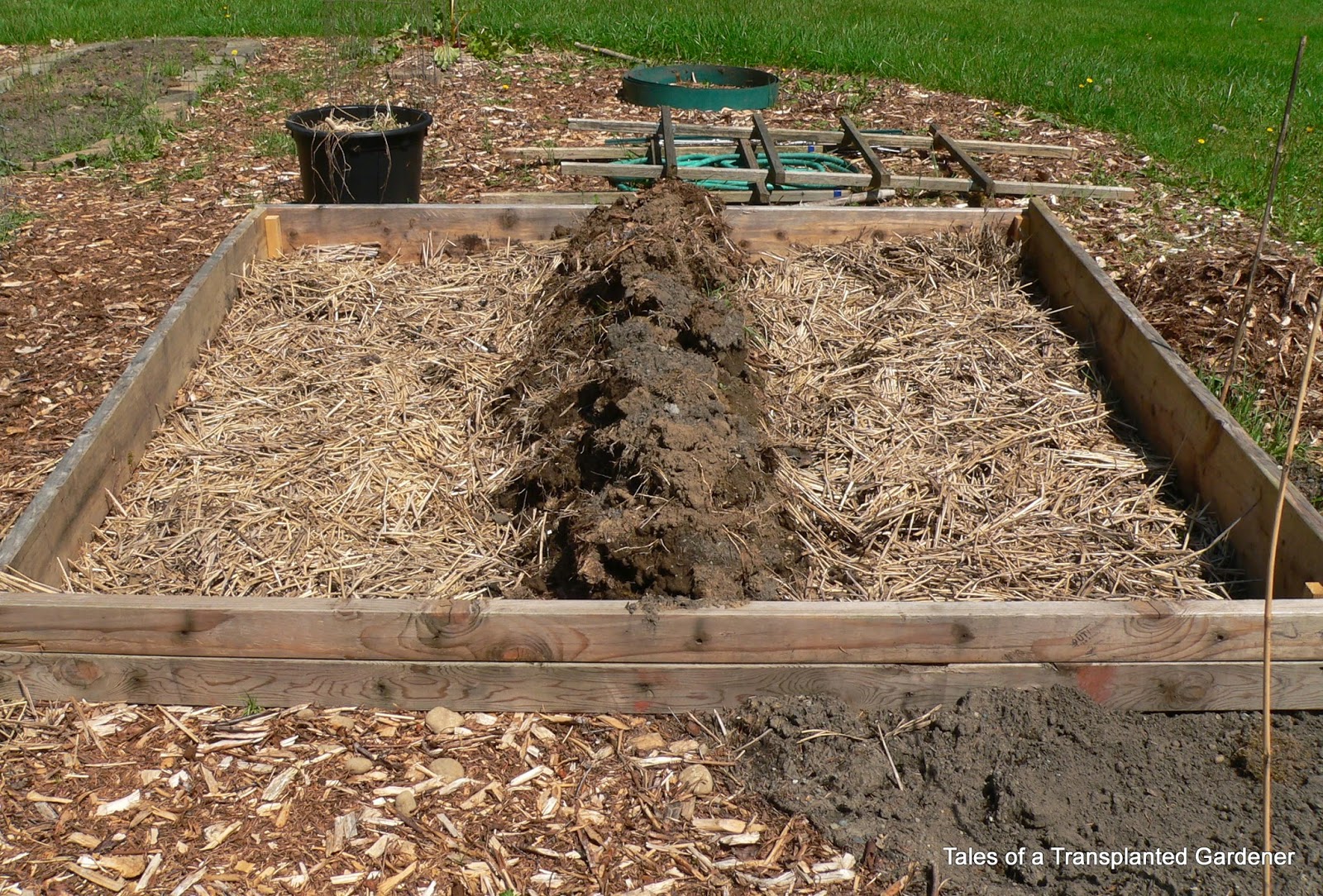 This is the potato bed.  The left side is planted with proper seed potatoes.  This year I got Purple Majesty, Yukon Gold, Red Norland and a few Yellow Finn which were recommended by the lady at the feed store where I bought them.  The right side are some from the pantry.

Last year, I tried the lazy potato garden method as I was generally unprepared to plant them but I felt like my window of opportunity was coming to a close.   I used the spading fork to poke through the grass/moss mix, tossed what compost and bit of soil we had left, and planted the spuds.  I mulched with straw primarily.  While we did get some decent potatoes, the harvest was not stellar in terms of yield.  It seemed that the best clusters of potatoes were all in a soil or compost heavy spot.

This year, I'm going with a more traditional type of planting to see if I can get a better yield.  We moved the bed to a spot that had just had cardboard and chip mulch put down last year.  It killed the grass enough that it was pretty easy to dig down a few inches after I pulled the mulch back.  I dug out the soil and put it in the strip in the middle (which I also added some of the purchased soil).  I figure the strip will hold the soil for hilling, and will serve as a path down the middle for harvest.  I put down some organic fertilizer (I purchased BLOOM All-vegetable mix ( http://www.blacklakeorganic.com/OrganicFertilizerMixesBLOOM) and covered the seed with soil.  I did toss some straw in there, mostly because I needed to put it somewhere.  I will hill the plants with soil, though I may fill in between with mulch.

You may notice the bare ground by the potato bed.  That's the remnant of where we unloaded the purchased soil.  I tried not to disturb it more than I had to, as just a couple weeks before, we discovered these: 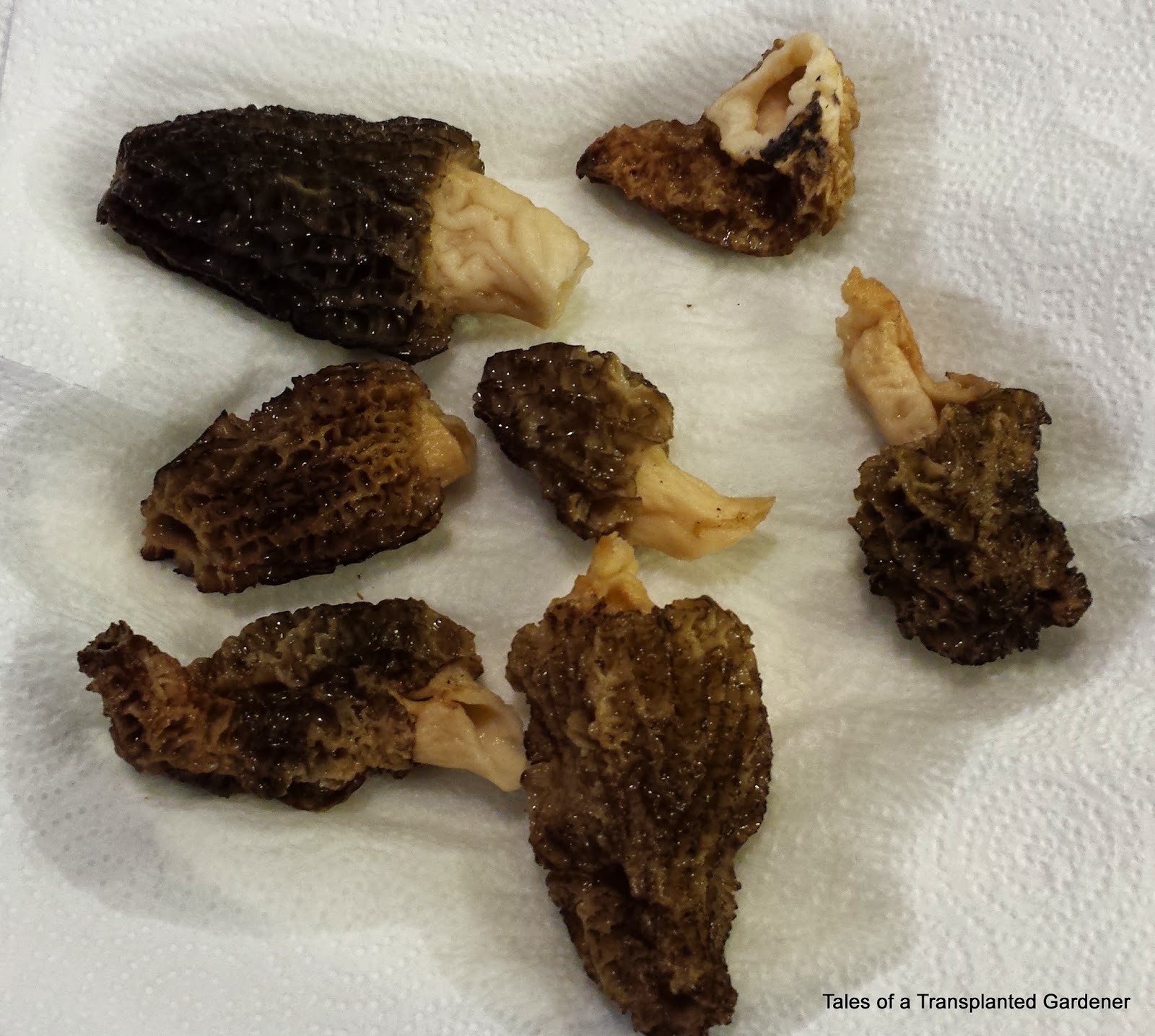 This is part of the Morel harvest that popped up in the garden in April.  As we're not mushroom foragers, we did have a friend come and give them a positive ID before the husband consumed them (I'm not a big mushroom eater).  You can see in this photo, the slugs like Morels too, as they ate some of the tops and thinned out the sides.  We figure the spores came in with the mulch, and we're hoping we helped distribute enough of the spores that they'll come back again.  He had never tried them before, but quickly became a fan.  I do wish I had weighed them, but I think we harvested a couple dozen. 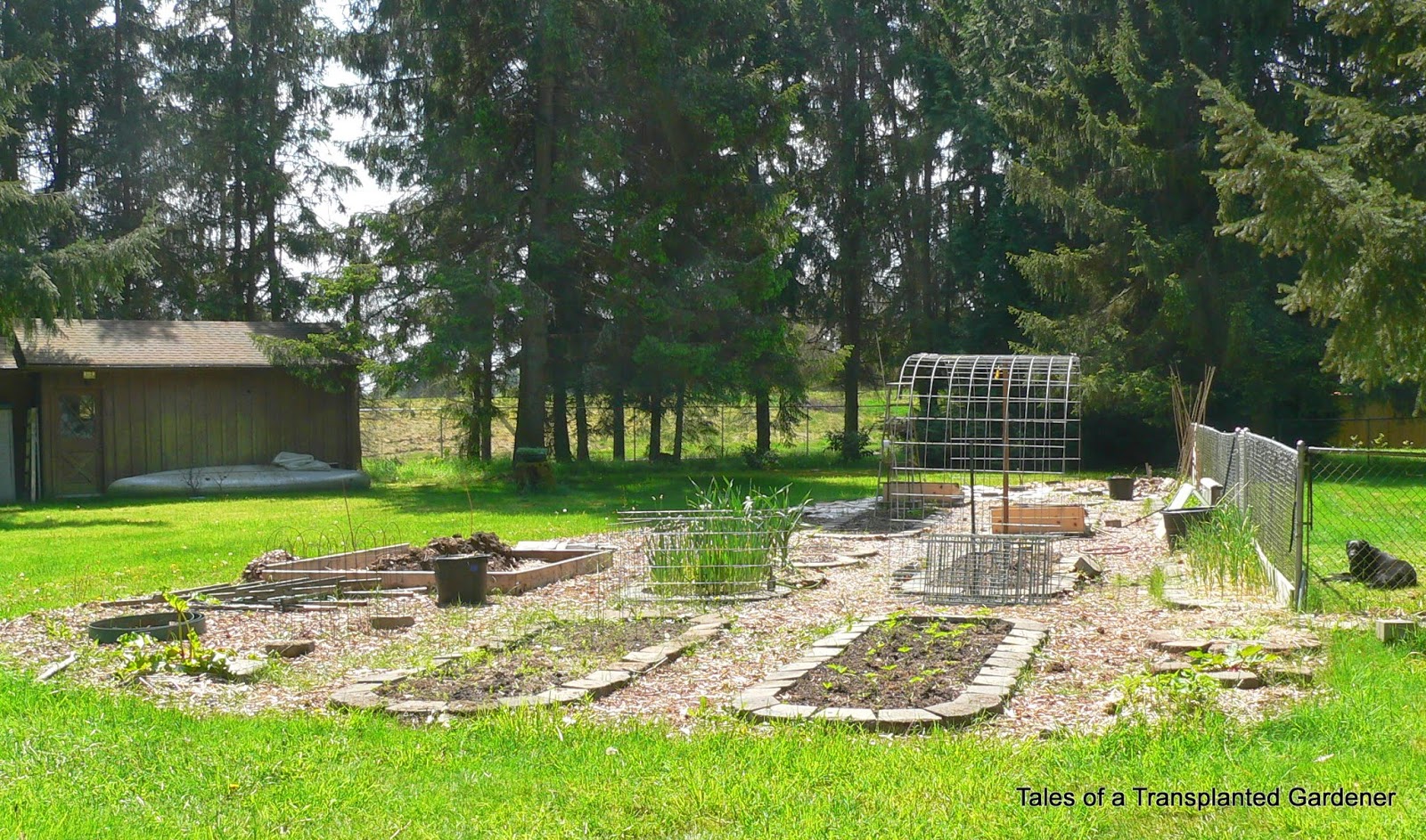 It's not a great photo, but here's an initial overview of the garden this year.  The beds in the foreground were added this winter.  They're the strawberry and asparagus beds.  I still need to haul some more mulch for the far end, but it's getting there.

Aside from that, I don't really have a lot going on quite yet.  We've had some nice weather, but it's still been a little cold to add the warmer season plants.  I have fall-planted garlic, Egyptian walking onions,  new berries (strawberries, raspberries & blackberries) and asparagus, rhubarb and sunchokes (Jerusalem artichoke), and some salad crops & broccoli started.


These are the walking onions and elephant garlic.  The photo on the left was taken in March, the one on the right was this week.  The fence was to keep the young cat out of the onions.  He caught a vole and was having quite a lot of fun tossing the dead rodent around in the onions.  Then for the next couple days, he'd come plowing through the onions like it was his own private jungle.  As they were just starting to look better after the terrible fall cutworm (I think) attack, we though a barrier was in order. 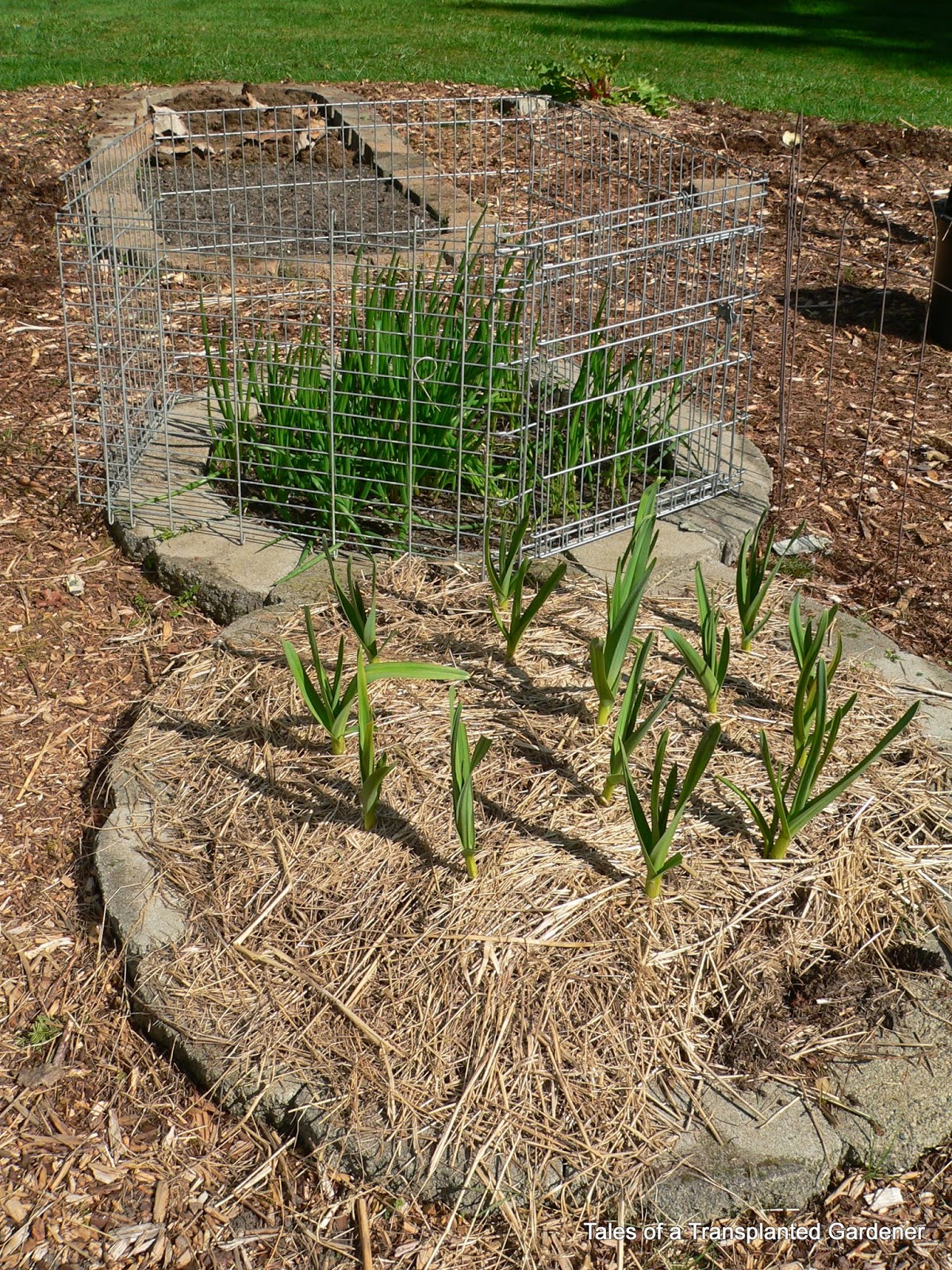 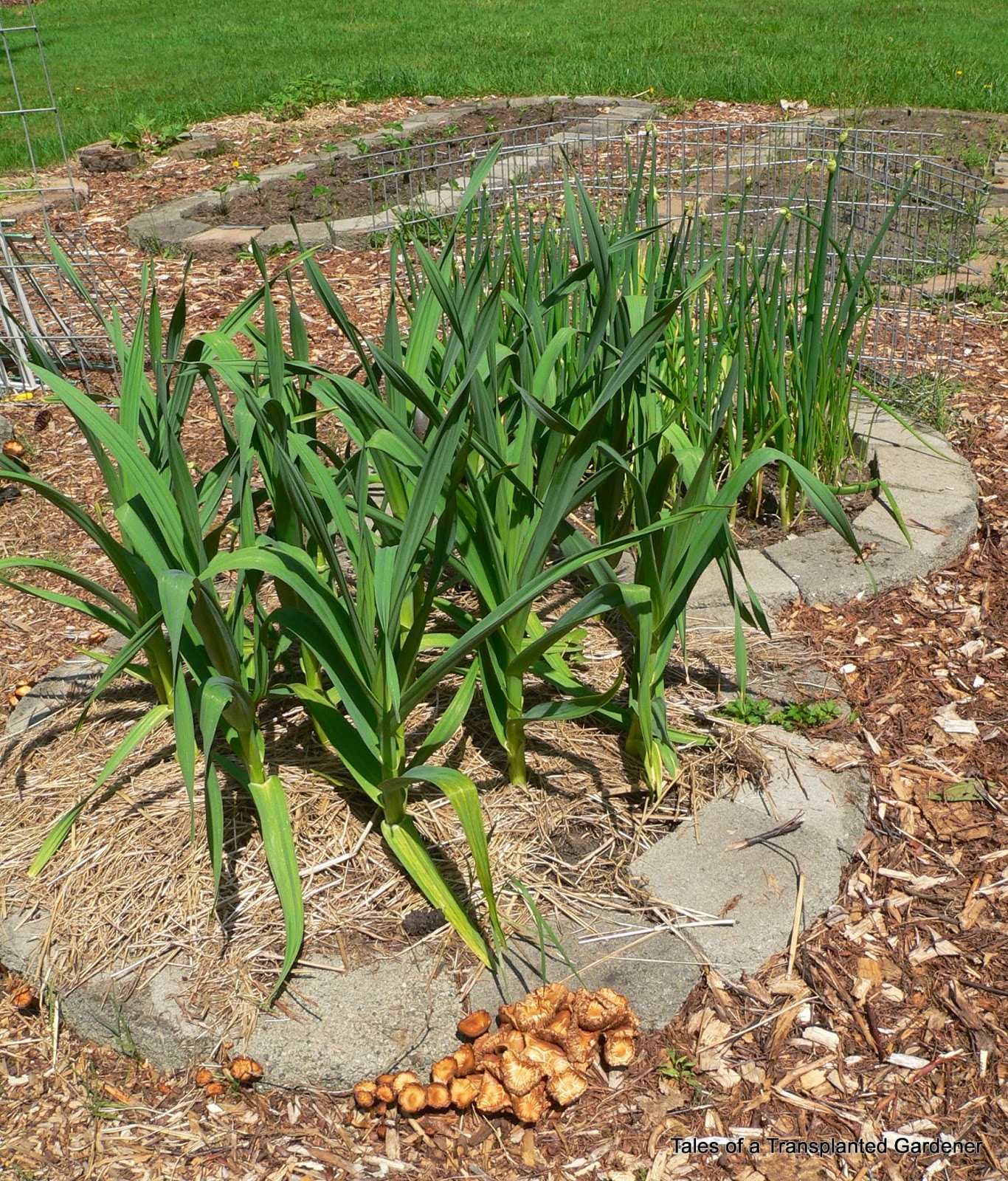 I have made 4 sowings of radishes now.  I've harvested and replanted most of the first batch in the foreground.  I'm using the side-lite from my neighbor's old front door as a makeshift coldframe.  It won't last too long before it rots I'm sure, but it worked well enough to get things growing in March. There are 3 sowings of peas in the background.  Sugar Snaps, Super Sugar Snaps, and Green Arrow bush peas.  I goofed and planted the first batch of snaps in the wrong spot, so I'll have the bush peas in between two tall patches.  I would probably only have one variety of snaps, but I forgot I had bought seeds and bought some more, so I figured I'd try them both and see if I have a preference. 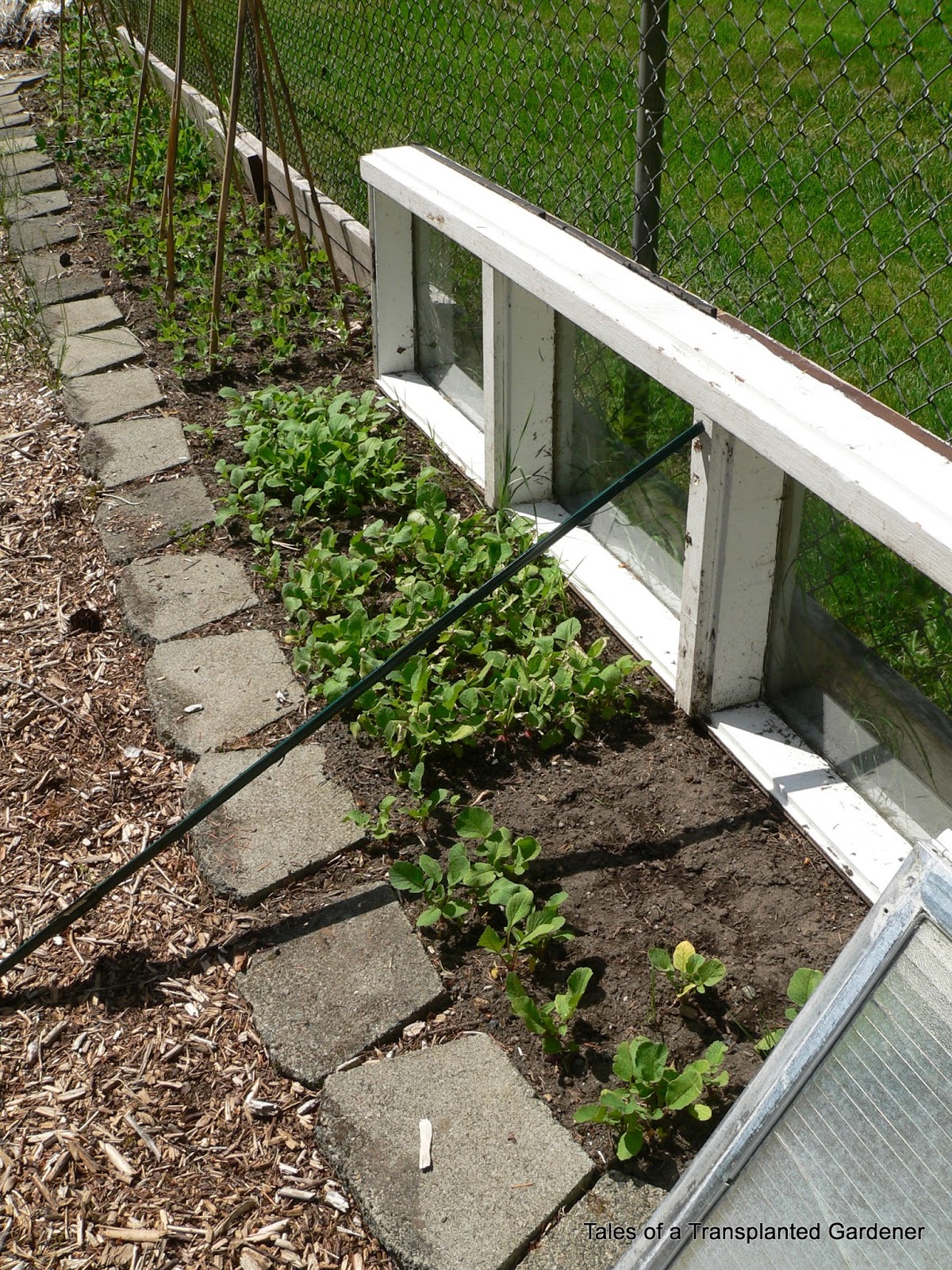 We're also trying out some other cold frames.  The neighbor gave us these windows as well, as they were some he had saved from the trash on a job.  We sort of put them together quickly, and  while we thought we were smart angling them toward the prevailing sunshine direction, we didn't take into account that they're terribly heavy (they're metal frames) and if we hinge them, well have to lift the weight of the length rather than the width.  It's not frost weather here, so really I'm using them for a heat boost to get a head start rather than to keep anything from freezing, so I've been leaving them offset so they don't overheat.  I can't lift them well by myself, so it seems the safest option for now.  The Savannah Mustard and the spinach seem happy under there. 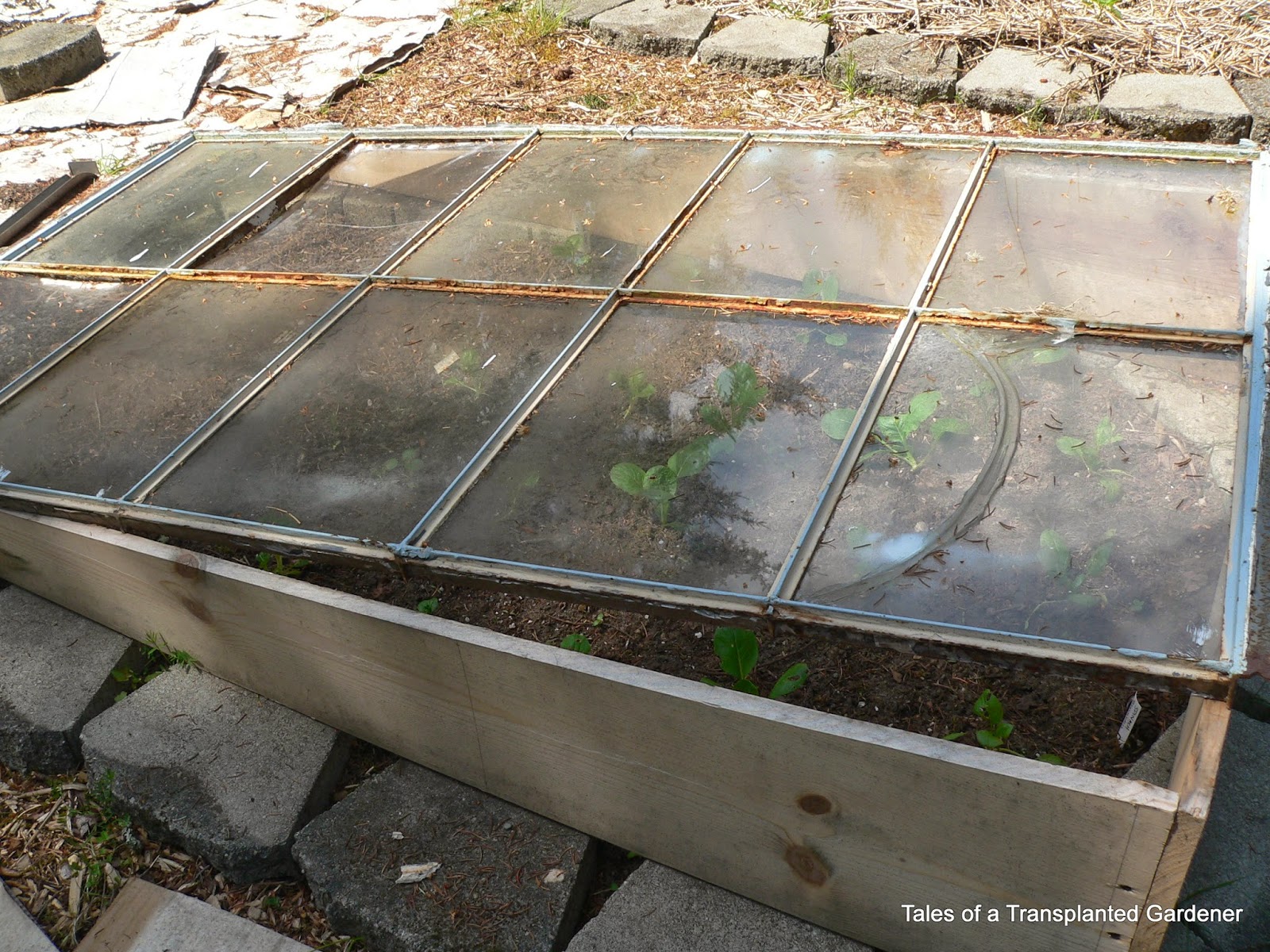 Finally, we have the rest of the berry patch planted.  I had some credit certificates from Gurneys, so that's where I got the berries.  I ordered two kinds of thornless Blackberries (Triple Crown and Ouachita), Canby thornless raspberries (x3), Anne (yellow) raspberry and Jewel- which I'm actually unclear if it's a black raspberry or a purple.  The Triple Crown (below) is the fastest grower so far.  The others are just starting to show signs of life.  The Jewel came later than the others, and arrived with some sprouts showing.  They should be greened up and heading the right direction soon. 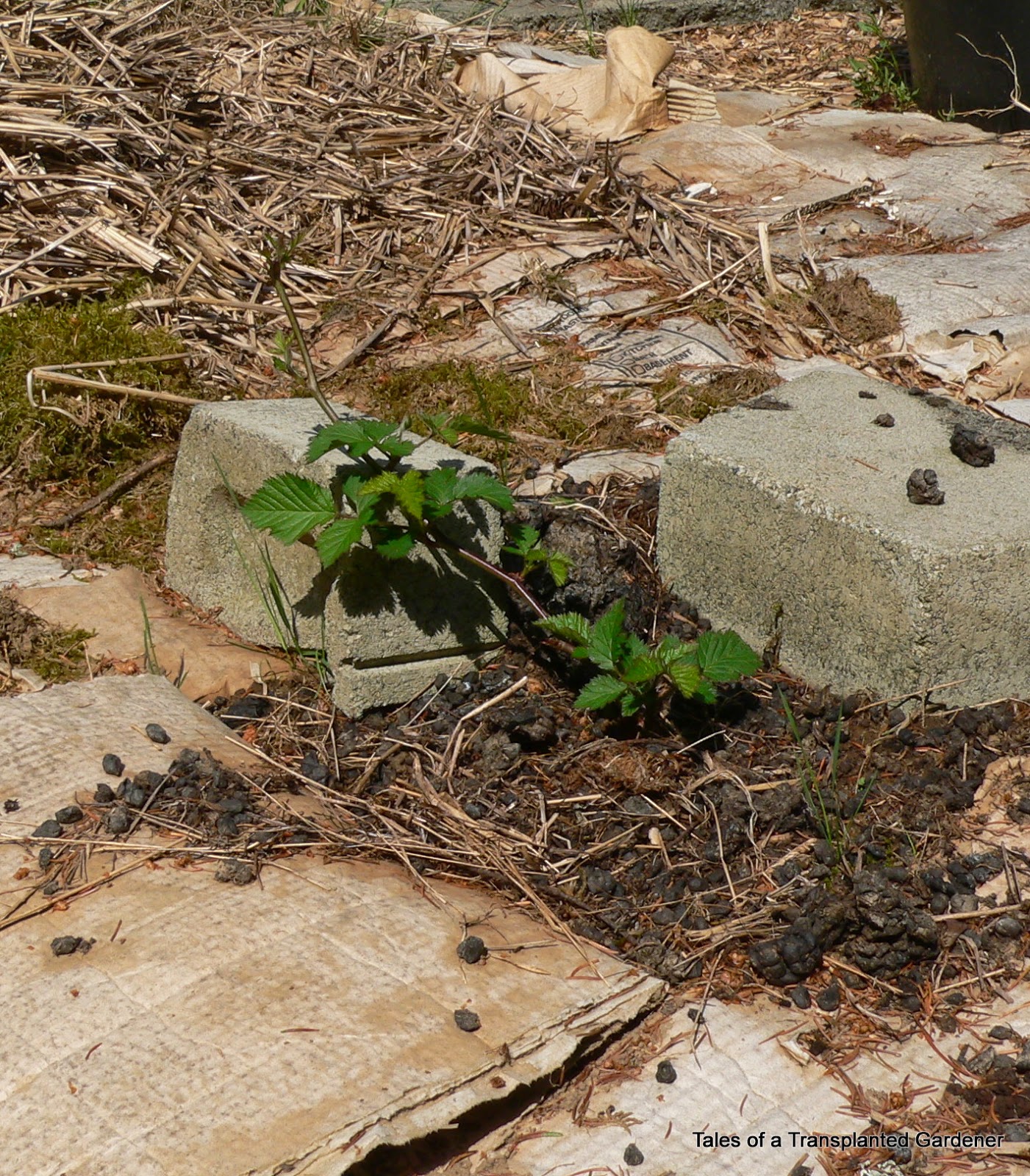 So, that's pretty much what's going on out there right now.  I've got some little tomato & peppers started in the house, and some more seedlings on the deck that should be headed out before too long.  Hopefully I'll have the whole thing looking a little more photogenic soon!

Your garden looks great, Amy! Looks like a LOT of work to my aged back LOL. How is your harvest coming?

Hey Amy, how was your summer? Looking forward to updates.... Take care, Kris