I thought I'd take a minute to backtrack to building the garden beds.  This first pic shows the plan I started with, superimposed on an aerial view of the back yard.  Of course, like many plans, it's not how it actually ended up, but I think the changes were for the better. 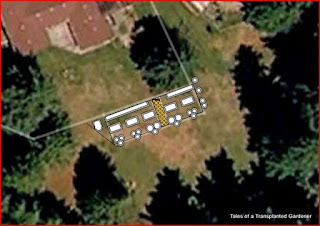 This is the "before" shot, looking east-ish. 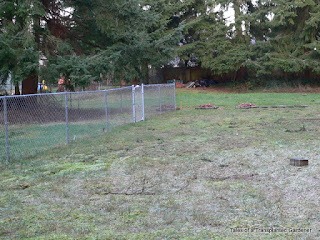 For the beds against the fence, we went with a 2x12 (untreated) back.  I didn't want to use the blocks against the fence for a couple reasons; first I wasn't sure how many I would actually need to build the planned beds (we had about 400 that we got free from around the building next door to my husband's work that was being demolished, though it took us about 4 trips to get them, so there was some fuel expense) and second, I thought it was an invitation to a weeding nightmare.  The lumber was in the culled pile at Lowe's which cost around $30 for the 2 bundles we bought.  It was enough for this backing and to build the big potato bed that was a spur of the moment addition.  It also gives a little height and space between the veggies and my boy dog. 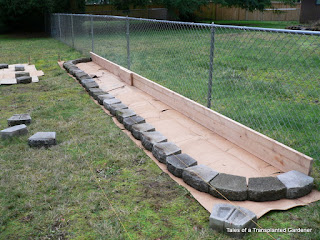 Because I was trying to build the garden and remodel the kitchen pretty much at the same time, we might not have done things in quite an ideal fashion.  I had tried to gather organic materials during the fall and winter but all I really had acquired were some OPBL (Other People's Bagged Leaves) and the compost we moved from the rental house.  I feel I should explain that we brought the compost as a simpler way to clean up the yard of the rental on our way out (we just moved a few minutes away) and I figured I would use it anyway.  It's really not that I was so attached to my compost I had to take it with me.  This winter we did get some horse manure and layered it with some of the leaves hoping to get it to "cook" some, but it was not a very hot pile- just warm at about 75 degrees when I checked it.

When I unpacked boxes from the move, I tried to sort them by condition.  Those that were still in decent shape that someone could use again to move, I put on Freecycle.  Those that had lost their integrity became the base layer for the first half of the garden.  The second cardboard half (pictured) would be the zillion boxes our new Ikea kitchen came packaged in.  If you do this, be sure to peel the tape or you'll be digging it up sometime in the future. 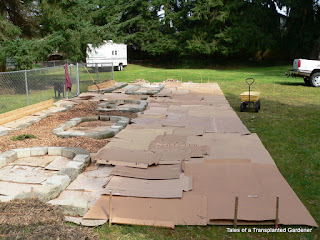 I picked up a piece of plastic (or maybe fiberglass?) edging at the Restore which I taped into the center size (I had made one sample ring out by the block pile) which helped me keep my circles round.  It's not a foolproof pattern by any means, but I found it helpful. 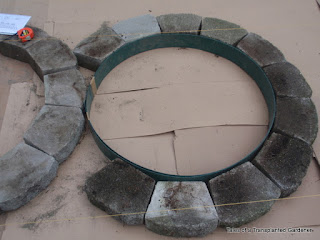 This spring, a man found my Freecycle request for hay or straw and gave me 4 very wet bales of straw he had used for archery practice (before they were wet and rotting).  I was happy to have them.  The first couple of beds I filled, all I had was the straw and horse manure/leaves mix.

I answered a Craigslist ad for rabbit manure, which had the potential to be some really nice stuff.  Unfortunately, what I found was a very wet (it rains all winter here) anaerobic pile.  I took some anyway, and used it in a couple of beds.  I did try to unclump it and mix some straw in with it to make it an aerobic mix instead.  The smell diminished in a day or so.  We ended up getting a yard of triple mix (topsoil, sand, compost) for about $22.  Most of the beds are filled with manure "compost" , a layer of half rotten straw, and topped with triple mix.

I have since acquired a large amount of hay (probably 35 bales worth, though some bales were partial or loose- free from another reply to my re-posted request on Freecycle, but about a 40 minute drive each way, so again, some fuel expense) as well as a bunch of alpaca manure.  The alpaca poo and hay mix have been a good, hot pile.  I will have to consider whether or not to get more, though out of respect for the neighbors, I don't think I should do it during any season they might have their windows open, as it was pretty "fragrant", I suspect because the alpaca people bagged the manure in plastic bags, which then sat in a pile until they posted on Craigslist (free).  It made for pretty easy loading into the truck, but a bit unpleasant to "unpackage".

I apologize for the switching between "we" and "I" when I write about the garden.  The garden is my doing, but the husband has been very helpful in building this one.  Thankfully, he was on-board with this one from the beginning (not so with the last one), and he's helped me by hauling blocks, hauling dirt, hauling mulch, hauling hay, etc.  This is the biggest garden we've ever built, and while I am again doing it on the cheap, it is quite labor intensive.


These poor little potatoes spent the winter sprouted in a paper bag in a cold room in the house.  I got them out as soon as I could, but they've been out there since the end of March and only one sprout has emerged.  They were probably too far gone, or the slugs are eating the growing tips, but they still look about like this under the mulch. 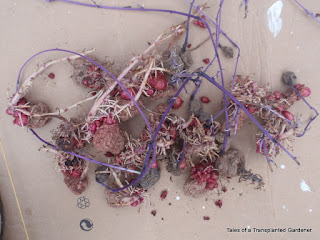 I also did some wintersowing (or early spring -sowing) so I'd have something to put out when we got the beds put together. 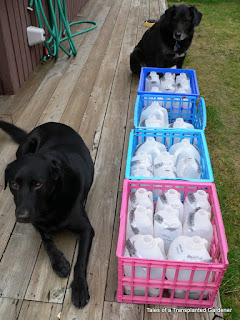 And just for the record, this is NOT good labeling.  First the Sharpie faded (which I did renew while I still could read them) but now the tape is falling off.  Right now, on the deck, I have a plant I do not know if it's a zucchini or a buttercup squash. 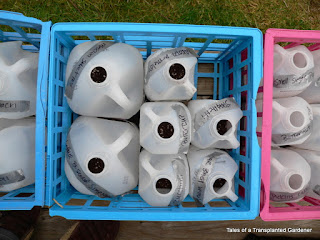 So, there's the rundown.
There are a couple things I probably should have done but did not.  I meant to use the spading fork to poke holes down through the ground before I put down cardboard, to help the roots go down into the native soil when they get there and to help the whole thing mix together in time.  I totally forgot this step.  My mother also mentioned something to me last week that I never even thought of.  As an adult, I have lived mostly in the west that has alkaline soil.  Now I live in the PNW with acidic soil.  I'm not sure if I should have put down some lime under there as well.  Too late now, so I'm hoping the composted stuff helps keep things neutral in there.  I guess we'll find out.
Posted by Amy at 1:37 AM

Welcome to western Washington! I realize you've been here a while, living in a rental, and only recently moved to your new home, but thought I'd say it anyway. I'm in the Tacoma area. I checked out some of your recent posts. Looks like you found a sweet little home, and with extra space for gardening, how cool is that?

You really lucked out on getting those concrete blocks for your raised beds. I have similar and they are ever so much better than wood. I have a similar problem finding leaves for compost. We have so few deciduous trees, and so many firs and cedars, which are not so much use for building compost. Nothing wrong with bringing your compost with you, making it is hard work.

You and your husband have done a great job, I love your layout! Kudos to you on finding so much good stuff on Craigslist and Freecycle.

There is an active group on the Gardenweb Plant Exchange, they have two plant swaps a year right down there in Olympia.

Thank you! We have a lot of trees, but like yours, they are all evergreen. Our next door neighbor has a maple and it pained me to watch her son put leaves in the yard waste bin. I told him he was welcome to pile them in my yard but he didn't. This year, I know them better and will get them from her. We also got a bunch from an older lady who we met at the HOA meeting, apologizing for not having the pile of leaves taken care of. After the meeting, I asked her address and told her we'd come take them away.

I'll have to find the plant exchange group. I think I found it a while back but I forgot to re-find it this spring. Thanks for the reminder. I loved the plant swaps in Colorado.